I have written a note about this topic last year, but that was in Chinese, as I’m rewriting my blog in English, I think it’s necessary make a translation as this one is so important. It is probably the last blog before the end of my this semester examination.

The graphics pipeline can be roughly divide to three steps:

There is a image of rendering pipeline, it is so perfect but I cannot found the English version of it: 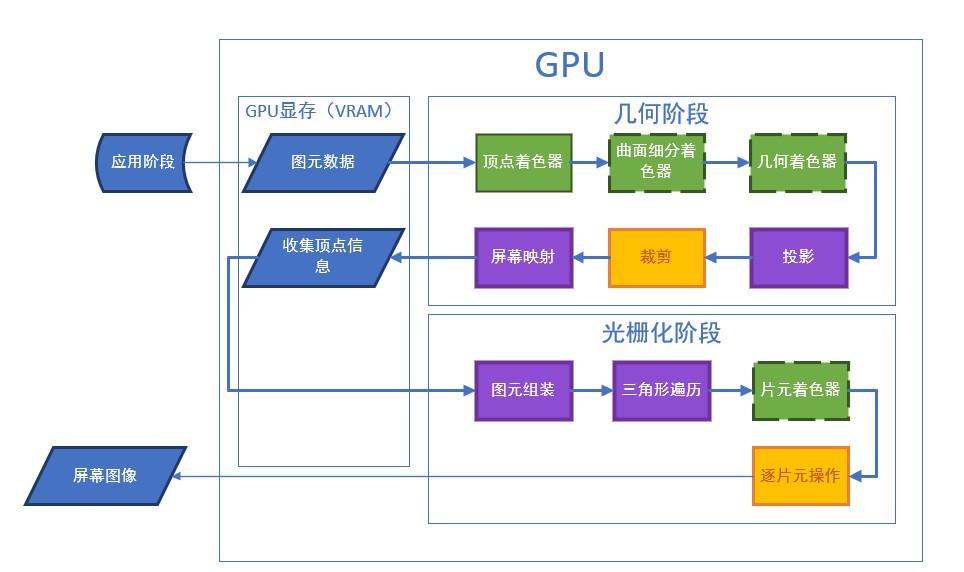 This step runs in CPU and fully programmable. In Unity, we use struct appdata_t to declare what kinds of data we want to obtain from CPU, and pass to GPU, this structure typically includes:

This is not a sub-step but also an important thing to know. Draw calls are instruction for rendering, every time CPU send a batch of mesh vertex data to GPU, it will also send a draw call with it to tell GPU how to process the data.

The first step in the Geometry step, it is fully programmable and necessary.

The pipeline also do camera transformation in this step.

Fully programmable and unnecessary. In this step programmer can add more vertices based on the vertices they already have. 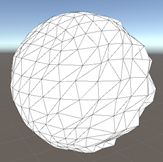 Fully programmable and unnecessary. In this step programmer can add, delete and modify vertices, but the efficiency of modification is much lower than Vertex Shader.

It will also classify vertices into three arrays:

Points will be assembled to corresponding shapes in Primitive Assembly step.

Not programmable and necessary. In this step GPU transform vertices from camera space to clip space based on one of two methods by transform a frustum to clip space (for more information about clip space), the frustum is the area that camera select to see, it includes squeezing the frustum and move the origin:

There are two alternative for selecting the area:

The clip space for perspective projection and orthographic projection looks different, but both of them have properties that the objects inside frustum has $x,y,z\in [-w,w]$, The transformation matrix will be introduced in another blog.

Configurable and necessary. Remove vertices that are outside of the frustum and transform it into a cube (Normalized Device Coordinates, any point in NDC has $x,y,z\in [-1,1]$), for orthographic projection, its already in NDC, for perspective projection, we need to perform perspective divide, that is $x,y,z=\frac{X}{w},\frac{Y}{w},\frac{Z}{w}$. The NDC transformation is usually after clipping, but some people suggest it in reverse, both of them make sense.

Since GPU already have the Normalized Device Coordinates, the next step is just map them into the screen. $x$ and $y$ are used directly, $z$ will be stored for depth test.

Configurable and necessary. Assemble points according to the output of Geometry Shader.

Configurable and necessary. For each pixel, check if it is bounded by any triangle, we generate a fragment for a group of pixels that is bounded by the same triangle. For those pixel that partly bounded by a fragment, we have following solution:

Fully programmable and necessary. Determine color for each fragment, for pixels whose color we don’t know, a common approach is using linear Interpolation, calculate the color from its adjacent vertices.

Configurable and necessary. In this step we apply operation on each fragment (including testing and merging).

Basically is 2D clipping, programmer can declare a clipping frame, only fragment that inside the frame will be displayed.

API is Abandoned, only fragments whose alpha value larger than the threshold will be displayed.

In this test, we have a stencil buffer, which is a mask that cover the whole screen, for each run of render, we can design a batch of rules that rewrite the buffer, or only render model follow some stencil value comparison rules (such as bigger, smaller, equal or always).

Depth testing allows programmers to set the occlusion relationships between rendered objects. Typically a lot of objects need to be culled in this step, so here comes a technology that can bring the depth test forward, early-z, however, it can only be used with opaque object because it conflicts with alpha test (when closer object has alpha value 0).

After all these test, GPU will merge the color of fragments into pixels. There are two method in common, one is replace directly, one is doing arithmetic calculation on fragment color (multiplication, addition).