In this case, the constructor takes properties as input, and assign them to member properties inside the class:

When the constructor takes a left value instance as input (the concept of left value and right value won’t be introduce here), all initialization that provide a left value instance will fall into this kind of constructor. Actually, “copy constructor” isn’t birth as copy constructor, it is because by definition, left value is stored in a certain memory address and has name, we don’t want to modify it too much when we use it as input, as we might want to use it somewhere after this. So we basically want to make the new instance looks like the given instance, but actually have no relation between them, as for how to implement the constructor is depends on our demands:

It is just call other constructor recursively, to save some time to write extra code.

Share pointer allow multiple pointer pointing at the same memory, and it will increase use count by 1. The basic data structure of a share pointer is:

We want useCount to be a pointer because it will be shared across all share pointer, put it in another way, when a new pointer is point to the same memory, we just need to increase useCount in any of the pointer (usually in the new pointer), and the useCount of all pointer that pointing at this memory will be increased.

So in the basic constructor we do two things, initialize useCount and point to the memory:

Except this constructor, we still have two other ways for initialization:

There are also right value version of assign statement and move constructor, but since the general concept is introduced, we just save some time shall we?

Except constructor, destructor is also important for this pointer because we are working in RAII:

At the end of the life time, the smart pointer will detach automatically, and the useCount will be decreased.

It is only a special case to the share pointer, which allow only one pointer to the memory address, and we can transfer the ownership by only std:move().

It is a special case that doesn’t affect the useCount, however it can not be used to access the memory by using -> and *, so normally it is used to monitor the useCount. 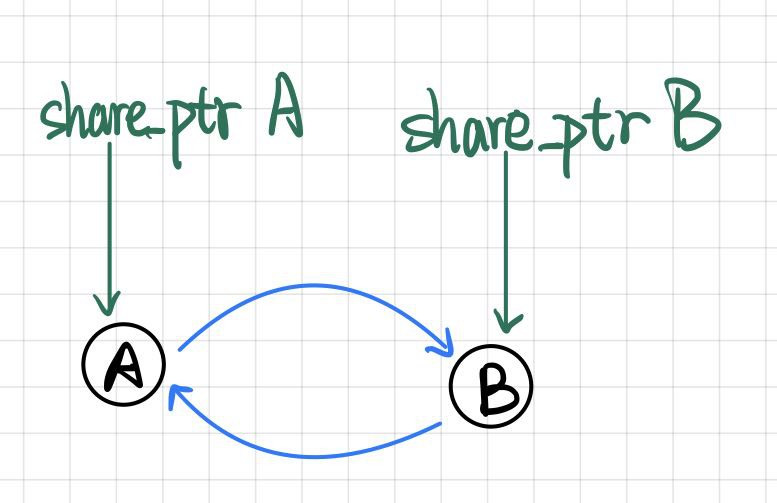 In this problem, we have for share pointer as shown as arrow in the graph, when we reach the end of life of share_ptrA and share_ptrB, the mechanism of share pointer will check the useCount of node A and node B, since there are internal share pointer pointing at each of them, they will not be deleted, which is not what we want.